Knowing what is needed to increase resilience (a protective factor against worsening mental health symptoms) has exceptional value-application globally.

With the advent of the COVID-19 pandemic, there were abrupt and significant social, economic, and political shifts in the global landscape. Concerns about personal health and the health of loved ones, social isolation, a loss of income, sometimes precarious domestic dynamics, and crippling uncertainty (to name a few) likely triggered and/or exacerbated pre-existing mental health problems in many people. Although certain aspects of life have somewhat returned to normal two-and-a-half years since the onset of the pandemic, the high incidence and persistence of mental health problems remains a serious public health concern.

Importantly, challenges around the pandemic did not necessarily cause the mental health crisis we are faced with, but they certainly illuminated its existence and likely accelerated its course.

Concerningly, a common contributor to the morbidity of mental health problems and psychiatric disorders is inaccessibility to care. Inaccessibility in this context refers to both the availability and affordability of healthcare services (e.g., counseling and/or pharmacological interventions). In addition, many individuals diagnosed with psychiatric disorders receive more than one diagnosis throughout their lifetime, further complicating treatment and leading to a reduction in quality of life for many.

Depression is a common mental health condition that also frequently co-occurs with anxiety. Furthermore, anxiety is known to worsen the clinical outcomes of depression. Individually, and in combination, these two conditions can have pervasive negative effects on an individual, and their loved ones' lives, if left untreated. Given (a) the high incidence of depression, (b) the common co-occurence of depression and anxiety, and (c) the global barriers to care for many individuals experiencing mental health problems, we were interested in investigating whether psychological resilience could serve as one protective factor against the negative effects of anxiety on depressive symptoms. More specifically, we aimed to ascertain whether high psychological resilience buffers against anxiety having a worsening effect on depressive symptoms.

Our science team at Neurozone collaborated with researchers from the Psychology Department at the University of Cape Town in 2021 and conducted a study consisting of 341 participants. We measured levels of depression, anxiety, post-traumatic stress symptoms, and sleep disruption. We also measured psychological resilience via the Resilience Index.

First, we ran descriptive statistics to get an overview of the sample’s psychiatric profile: 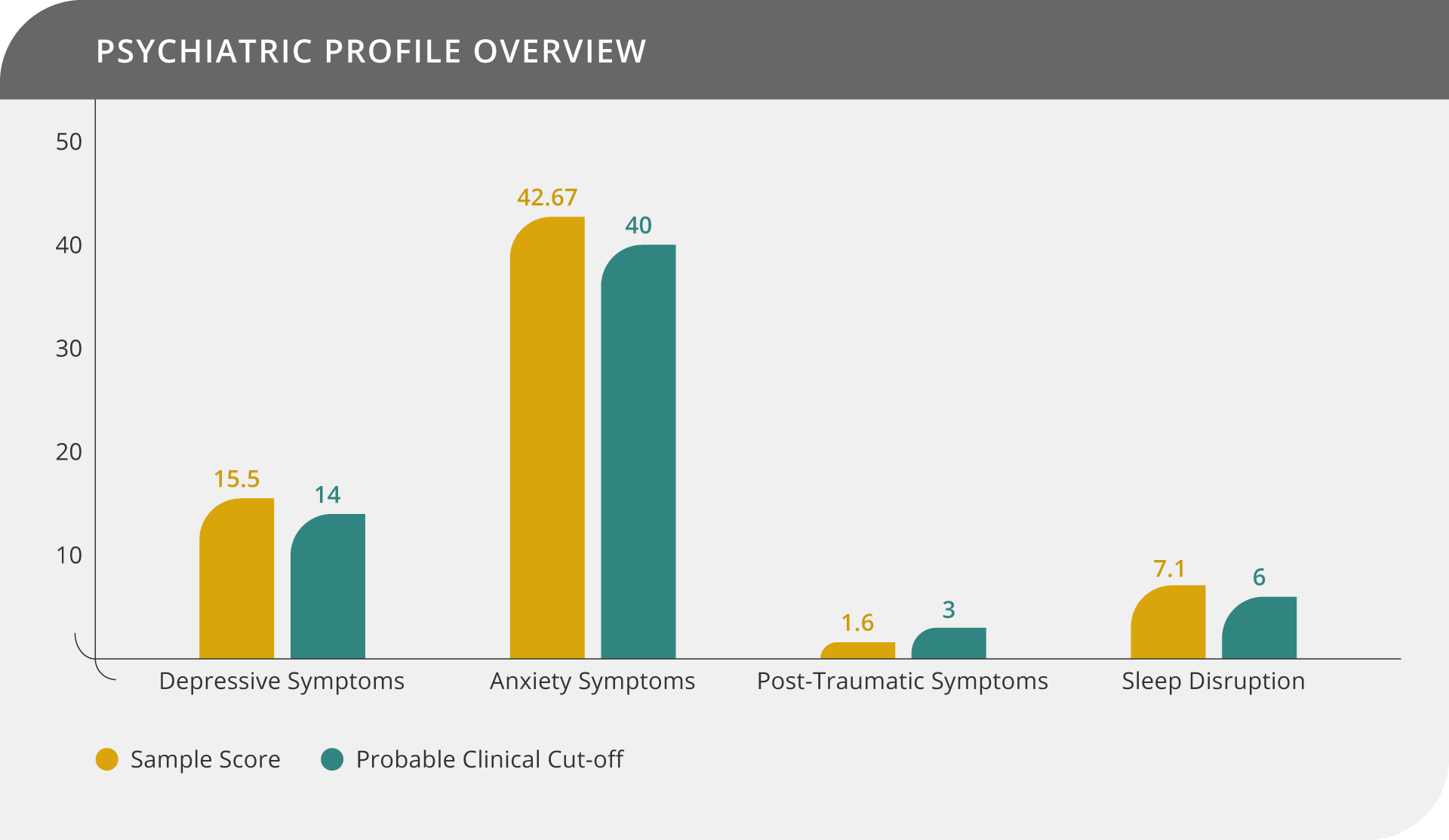 Results show that the sample averages for all the psychiatric outcomes, with the exception of post-traumatic stress symptoms, were above the probable clinical cut-off values. These results indicate that, on average, this sample likely exhibits clinical symptoms of anxiety, depression, and sleep disruption.

Next we focused on hypothesis testing. Our main variable of interest was the interaction between anxiety and resilience in predicting depressive symptoms. More specifically, we were interested in determining whether resilience moderates the negative, causative effect that anxiety has on depressive symptoms. We ran linear regression to investigate this proposed relationship.

Our results confirm our hypothesis that resilience indeed moderates the causal relationship between anxiety and the worsening of depressive symptoms. Put differently, the higher an individual’s resilience, the less depressive symptoms they experience as a result of anxiety. See below: 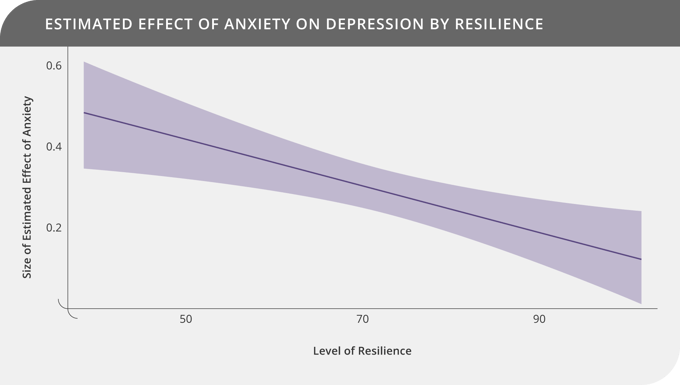 Anxiety and depression are common conditions that frequently co-occur. Globally, there is a barrier to care for many in the form of counseling and/or pharmacological interventions in treating these debilitating conditions. Our latest results have shown that psychological resilience could serve as one protective factor against anxiety’s negative effect on depressive symptoms. These results build on our ongoing research demonstrating that resilience can be enhanced. We have consistently shown that  cultivating certain behaviors (like reducing negative thought patterns, creating a sense of meaning in life, forming entrusting relationships, and adopting an optimistic perspective) predicts an increase in resilience. Together, these findings can be applied to benefit individuals beyond clinical practice. Behavioral interventions known to enhance resilience can be implemented on a larger scale in organizations as part of well-being programs, as well as in tertiary institutions where students tend to be at an increased risk for mental health problems.

We are experiencing an alarming increase in the incidence and chronicity of mental health problems across the globe. A small proportion of people have access to adequate care. Identifying protective factors against mental health problems could be one approach to lessen the burden of symptoms for many. Our results show that building psychological resilience could be an important protective factor in minimizing depressive symptoms resulting from anxiety.

Footnotes on the analyses:

The development and validation of the Resilience Index

This peer-reviewed paper indicates that our Resilience Index is a reliable, valid measure of resilience.

Webinar: The Dynamic Neurobehaviors in the Workplace Index

Learn how neurobehaviors shift during stressful situations to optimize our capacity for high performance.